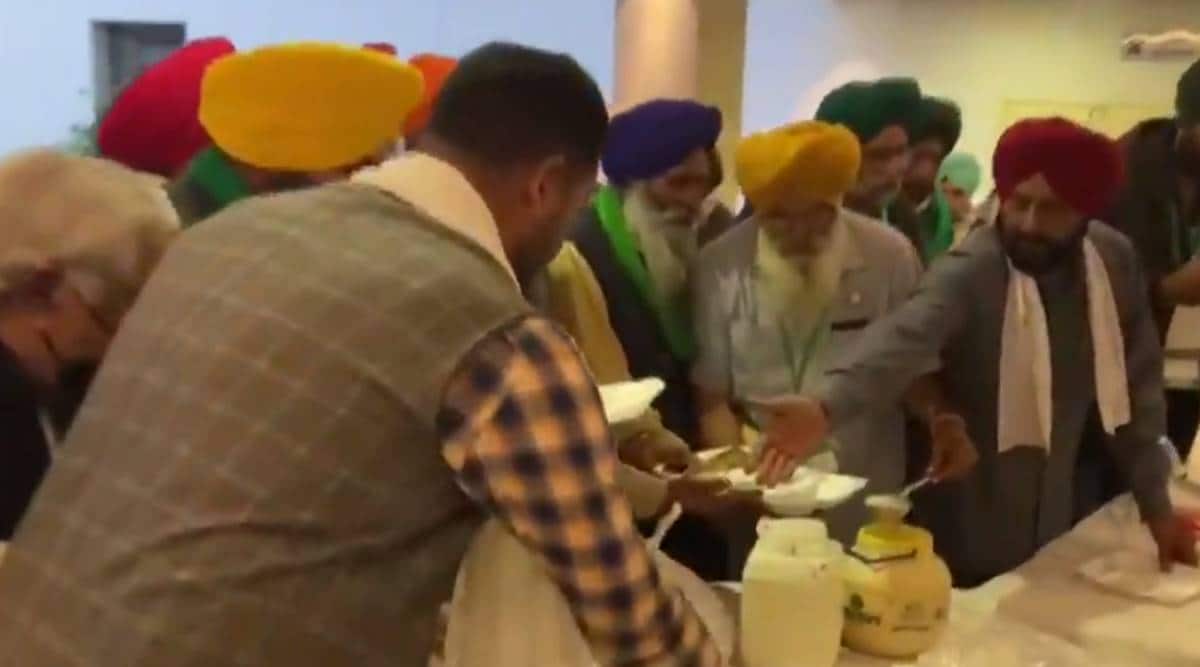 
Farmers’ leaders queueing up to eat the lunch brought in by a white ambulance at Vigyan Bhavan. (Source: Screenshot/ANI)

Amid talks with the Centre over the contentious new farm laws at New Delhi’s Vigyan Bhavan, representatives of farmers’ unions refused to eat the food offered by the government and instead had the langar brought in by a van.

A video shared by news agency ANI showed the farmers queueing up to eat the lunch brought in by a white ambulance to deliver food prepared at a gurudwara.

#WATCH | Delhi: Farmer leaders have food during the lunch break at Vigyan Bhawan where the talk with the government is underway. A farmer leader says, “We are not accepting food or tea offered by the government. We have brought our own food”. pic.twitter.com/wYEibNwDlX

“We are not accepting food or tea offered by the government. We have brought our own food,” ANI quoted a farmer leader as saying.

This was a repeat of Tuesday’s meeting when farmer leaders had refused to join Union ministers Narendra Singh Tomar and Piyush Goyal for a cup of tea. The farmer leaders instead invited the ministers to join them at langars organised for farmers camped on Delhi’s borders. The farmers’ leaders had said the ministers could be treated with jalebis there, and left the venue without having tea.

The farmers’ strike near the borders of Delhi has entered its eighth day as they refuse to budge on their demand to repeal the new farm laws. The fear relating to the weakening of APMC mandis and minimum support price (MSP) regime are among the main factors behind the ongoing protests. Emphasising that their demand for repeal of the new farm laws was “non-negotiable”, the farmers have also threatened to block other roads leading to Delhi if their demands are not met.

On Wednesday, the farmers demanded the government to call a special session of the Parliament to repeal the contentious farm laws.

The farmers have expressed apprehension that the Centre’s farm laws would pave the way for the dismantling of the minimum support price system, leaving them at the “mercy” of big corporates. Prime Minister Narendra Modi has maintained that the new laws would provide farmers with better opportunities and accused the opposition parties of misleading farmers.

Pinarayi Vijayan interview: ‘The anti-Kerala stand of Congress, BJP, their communal overtures are our main challenge’