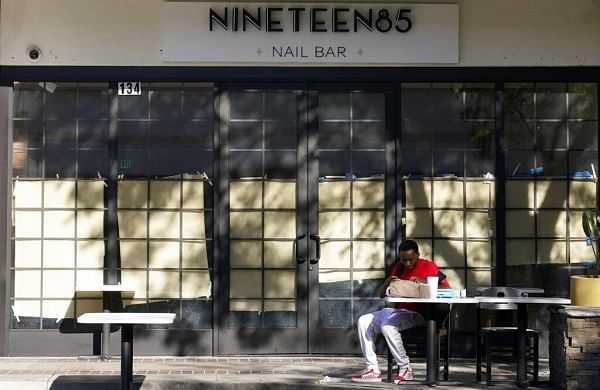 WASHINGTON: States faced a deadline on Friday to place orders for the coronavirus vaccine as many reported record infections, hospitalisations and deaths, while hospitals were pushed to the breaking point, with the worst feared yet to come.

The number of Americans hospitalised with COVID-19 hit an all-time high in the US on Thursday at 100,667, according to the COVID Tracking Project.

That figure has more than doubled over the past month, while new daily cases are averaging 210,000 and deaths are averaging 1,800 per day, according to data compiled by Johns Hopkins University.

Arizona on Friday reported more than 5,000 new COVID-19 cases for the second straight day as the number of available intensive care unit beds fell below 10% statewide.

Hospital officials have said the outbreak will exceed hospital capacity this month.

Nevada reported 48 new deaths from the coronavirus on Thursday, marking the deadliest day since the onset of the pandemic as case and death totals continued to rise more than a week after new restrictions were implemented on businesses.

One hospital was so full it was treating patients in an auxiliary unit in the parking garage.

North Carolina reported a record 5,600 new confirmed cases Thursday and 2,100 hospitalizations, as it awaited nearly 85,000 doses of the Pfizer vaccine, perhaps as early as December 15.

Health officials fear the situation will get worse before it gets better because of delayed effects from Thanksgiving, when millions of Americans disregarded warnings to stay home and celebrate only with members of their household.

At the same time, hospitals, and their workers, were stretched to the limit.

In Pennsylvania, almost half of all hospitals in the south-central region and a third of those in the southwest anticipated staffing shortages within a week, according to the state Department of Health.

Meanwhile, nurses in the Philadelphia area said the overwhelming number of COVID-19 patients was affecting the quality of care they can provide.

“I see that as a significant concern that we need to work to avoid,” Levine said.

“I hear from physicians and from hospital leadership all the time about how strained the hospitals are.”

Officials also expressed concern that Americans will let down their guard once states begin administering vaccines.

It will take weeks to months before many of the nation’s most vulnerable residents can be immunized, White House coronavirus response coordinator Dr. Deborah Birx said Thursday.

Until then, she said, Americans must not hold indoor gatherings with outsiders or take off their masks at any time when they’re outdoors and continue to keep their distance from others and wash their hands.

“I think everyone can see that this current surge that we’re experiencing is much faster and broader across the United States and is lasting longer,” Birx said after attending a meeting at United Nations headquarters in New York.

An influential modeling group at the University of Washington said Friday the expected vaccine rollout in the United States will mean 9,000 fewer deaths by April 1.

The Institute for Health Metrics and Evaluation predicts that warmer temperatures and then rising vaccination rates will lead to steady declines in the daily death toll starting in February.

But even with a vaccine, if states do not act to bring current surges under control, the death toll could reach 770,000 by April 1, the group said.

Nationwide, the coronavirus is blamed for almost 277,000 deaths and 14 million confirmed infections.

As states prepared to vaccinate residents, most appeared to be heeding nonbinding guidelines adopted this week by the Centers for Disease Control and Prevention to put health care workers and nursing home patients first.

But states also were balancing concerns about the economy and protecting essential workers.

Kansas Gov. Laura Kelly said the state’s vaccine plan calls for the first shots to go to front-line health care workers with a high risk of coronavirus exposure, including workers in nursing homes, as well as nursing home residents.

Meatpacking plant workers and grocery store employees will be next in line, along with first responders.

US President-elect Joe Biden said on Friday that Americans will not be forced to take the coronavirus vaccine and he is willing to get vaccinated publicly to assuage any concerns about its efficacy and safety.

“I don’t think they should be mandatory. I wouldn’t demand it to be mandatory, but I would do everything in my power just like I don’t think masks have to be made mandatory nationwide,” Biden told reporters at a news conference in Wilmington, Delaware.

Biden was responding to a question if COVID-19 vaccine be made mandatory.

“I will do everything in my power as the president of the United States to encourage people to do the right thing, and when they do it, demonstrate that it matters. That’s why I said in my inaugural speech I’m going to ask people to commit for 100 days to wear a mask, not because I’m asking it for any reason to punish-this is not a political issue,” he said.

“It has become one. But if people do it for 100 days in the middle of what will be still a raging crisis and the vaccine is able to be distributed, they are going to see deaths drop off the edge,” he said.

“They are going to see hundreds of thousands of people not getting sick; and my hope is they will be then inclined to say okay, it’s worth the patriotic duty to go ahead and protect other people,” Biden said.

Biden said he is willing to get inoculated in public to assuage any concerns about its efficacy and safety.

“I think that my taking the vaccine and people seeing me take that vaccine is going to give some confidence,” Biden said, responding to a question adding that what bothers him the most is the wild assertions the Trump administration is making about how this is going to go away.

“Well, the fact of the matter is that they won’t be,” he said.

“You’re going to see tens of millions of Americans taking the vaccine and you’re going to see the president of the United States and three of the four living former presidents doing it publicly as well. It’s going to take some effort to rebuild confidence in science because it’s been so diminished in this administration thus far,” Biden said.

Covid-19 vaccinations may be needed for cats, dogs as well: Scientists