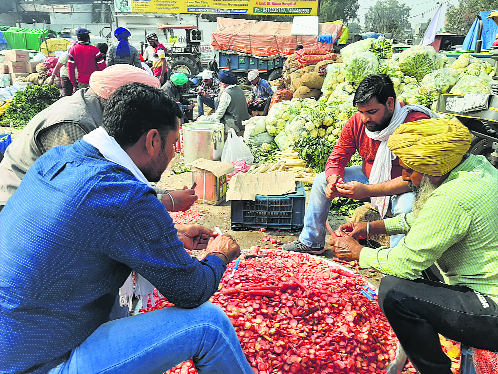 Caste lines stand blurred, the edges around political ideologies have softened and physical boundaries of states are no longer divisive at the Singhu border between Haryana and Delhi, where protesting farmers are camping.

Across age groups, farmers from Rajasthan, Odisha, Uttar Pradesh, Tamil Nadu and Madhya Pradesh have come to join hands with their counterparts from Punjab and Haryana to campaign against the Central farm laws.

United by intent, they are declaring this is their do-or-die battle and emphasising that a rollback is the only option available with the BJP-led NDA government at the Centre.

“We are going nowhere, whether it takes six months or one year. The government has to take back its black laws. If the corporates take over the farming sector, we are doomed. We’d rather die here than stay silent,” says Kapoor Chand of Sangrur.

One week into the agitation and their spirits are high, deriving strength from every tractor-trailer making its way to the protest site. “We didn’t come all the way from Punjab, breaking barricades and pushing our way through police deployment to go back after a token protest. We are here for the long haul,” Harnek Singh of Jalandhar says. While songs of valour blare from tractors on the stretch occupied by Punjab farmers, the Haryanvis are easily discernible in the crowd of colorful turbans by their hookahs, as they pass it around.

From Malerkotla, 25 men of a minority community are busy making and serving sweet rice. “This fight is for the entire humanity. If the farmer suffers, all of us will be hit. So, 25 of us have come from our village to contribute our bit by serving sweet rice,” explains Haji Mohammad Jameel.

Mohan Singh, a farmer from MP who is accompanied by 250 others, says the difference of culture has ceased to exist. “Nobody is a stranger. We are united by a cause,” he maintains. Farmers from Odisha led by Akshay Kumar have joined the protest and support from other states too is pouring in.

The farmers are clear that the fight will be no cakewalk. Farming is their way of worship and this stir a pilgrimage.

Sputnik V Covid shot may get emergency use nod in India soon: Report