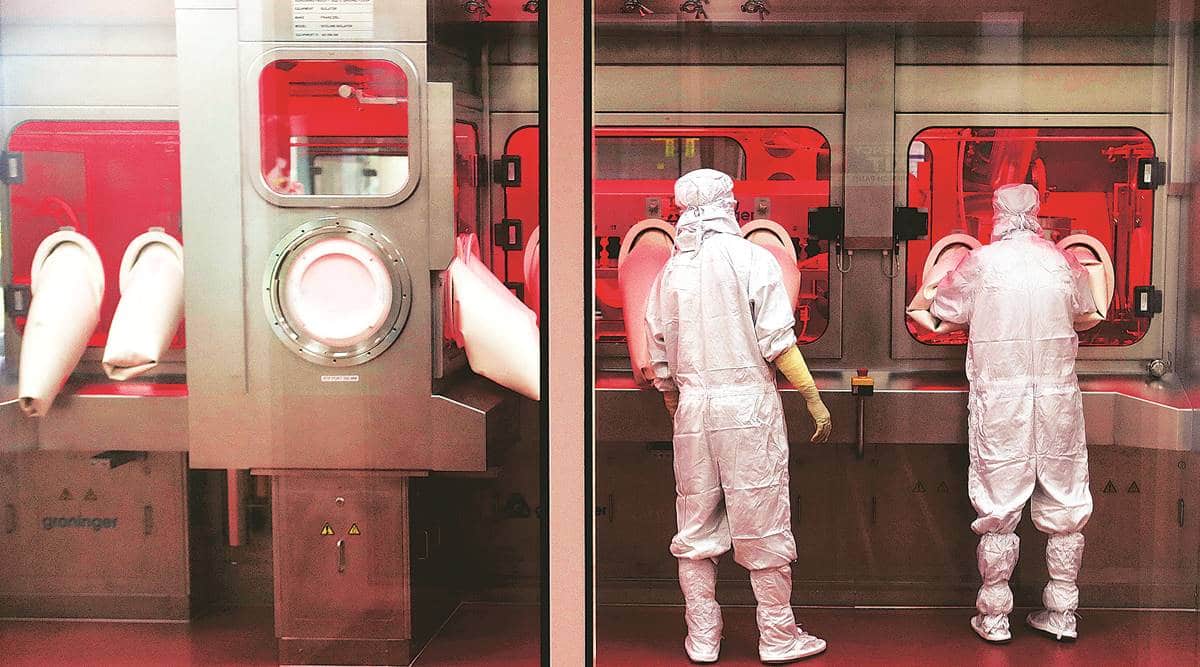 
At the Pune-based Serum Institute of India, which has collaborated with Oxford University and pharmaceutical major Astra Zeneca for the production of one of the five vaccine candidates in India. (Reuters)

On January 11, China shared the genetic sequence of SARS-CoV2, the shutting down borders and economies across the world. On March 16, US-based biotech firm Moderna and a week later, researchers at Oxford University announced the start of human trials on vaccines against it.

In India, the government resorted to an unprecedented lockdown to contain the virus. Up until April 19, by which time the country had reported 15,712 cases and 507 deaths, a vaccine was nowhere on the horizon. That day, at the daily briefing by the Ministry of Health & Family Welfare, Joint Secretary Luv Aggarwal said a high-level task force would “identify a pathway for vaccine development” — the first time the government mentioned the V-word.

With that, the ball was set rolling. By July, the Indian regulator had cleared Phase 1 human trials of the first indigenous vaccine candidate, developed by the Indian Council of Medical Research (ICMR) and Bharat Biotech.

READ | 310 km from Raipur, a trek of half-a-day with vaccine, hoping to catch tribals in time

Some slips followed (including the ICMR’s incredulous August 15 deadline for a vaccine), but now India is finally on the cusp of a vaccine for .

Despite the experience with the Universal Immunisation Programme, one of the largest public health programmes in the world, Covid vaccination will be an entirely different ball game for India. Unlike the UIP, which focuses largely on children, the Covid exercise involves a major chunk of the population, with five different vaccines to track, from doses to beneficiaries.

With the UK already granting emergency use approval for the Pfizer vaccine, regulatory bodies are seeking to rush through their approvals. With at least five candidates in different stages of clinical trials, India hopes to roll out its first vaccine in the next few weeks.

However, the rollout would be just the start of an unprecedented exercise, with India seeking to vaccinate as many of its 1.3 billion people as possible, with at least two, maybe even three, doses each.

PM Narendra Modi being briefed during a visit to the Zydus Biotech Park to review the development of COVID-19 vaccine, in Ahmedabad (PTI)

Taking the vaccine from the factory to the syringe broadly involves three stages —transportation, storage and the actual inoculation. The good news is India has much of the infrastructure in place, thanks to its Universal Immunisation Programme (UIP), one of the largest public health schemes in the world, covering close to 2.67 crore newborns and 2.9 crore pregnant women against 12 diseases.

“Since 1984, when the UIP was started, India has created a network of more than 26,000 cold chain points with temperature trackers for vaccines. Now we only need to augment this,” a senior Health Ministry official told The Sunday Express.

Which is why, despite publicly voiced concerns over infrastructure to store and transport vaccines, with private players offering to pitch in, sources in the government say this is one area where the country could be comfortable — at least for now.

The real challenge would be the logistics involved in taking the vaccine to the beneficiaries, and in tracking them.

Not just multiple vaccines are being used against one disease but also, unlike UIP, which focuses largely on children, the inoculation drive is to cover newborns to adults, from the healthy to the infirm, those with underlying diseases and those without, those in urban areas to those in some of the remotest geographies. As early as August 12, the first meeting of the National Expert Group of Vaccine Administration (NEGVAC) — co-chaired by Dr V K Paul, member, NITI Aayog, and Union Health Secretary Rajesh Bhushan — decided that on the agenda should be augmenting technology platforms to ensure that each vial of the vaccine and each beneficiary is tracked.

Since 2015, India has had a vaccine tracking mechanism as part of the existing immunisation programme. Called eVIN or Electronic Vaccine Intelligence Network, the software, which works through a smartphone application, has digital information on vaccine stocks and the temperatures in the cold chain. One of the first tasks assigned was beefing up the eVIN.

Multiple vaccine candidates mean each has its own cold-chain requirements — making digital tracking critical. Any exposure to outside temperatures can reduce the potency of a vaccine and hence wastage.

“You need an IT system to know where the vaccine is procured from, how and where it is kept, whether temperature parameters are maintained etc. All this tracking is needed on real-time basis,” a top government official had said after the August 12 meeting.

Since then, key features have been added to the eVIN app. Now called Co-VIN, the software can track the beneficiary and allocate a vaccination session. Also, once a person is vaccinated and if there is no adverse event, a QR-based digital certification is generated.

States across the country have already started using Co-VIN for another important task: uploading the database of healthcare workers, who will be the first priority group to get a vaccine. On November 23, the Centre told states to identify the potential vaccinators among the healthcare workers.

Along with a detailed architecture to augment the IT platform, the expert committee built a blueprint for vaccine administration.

On October 26, the Health Ministry recommended the creation of state steering committees headed by Chief Secretaries; state task forces by Principal Secretaries, Health; and district task forces — to plan, implement and mobilise resources and to carry out “mid-course correction”, if needed.

The expert group also built an architecture to ensure last-mile reach of any vaccine, since real work on the ground will have to be done at the block level. 📣 Follow Express Explained on Telegram

On November 24, Vandana Gurnani, Additional Secretary & Mission Director (NHM) in the Health Ministry, wrote to states seeking Block Task Forces, headed by Sub-Divisional Magistrates/tehsildars, who would “identify vaccinators across government and private sectors so as to minimise disruption of routine immunization services”.

Stressing on decentralisation as a “crucial and important” aspect, public health expert Dr K Srinath Reddy told The Sunday Express, “Vaccine procurement will be negotiated centrally and quality control will be also at the central level.

But once the stocks are given to the states, the logistics should all be under the state and district administration.”
Reddy also underlined the value of planning. “How to give an intramuscular injection, how to look for side-effects, how to do sterilisation, and dispose of the syringe, can be a taught in a matter of few days. This should not too difficult, but should be taught under good supervision. Initial injections should be given under the supervision of experienced people.” 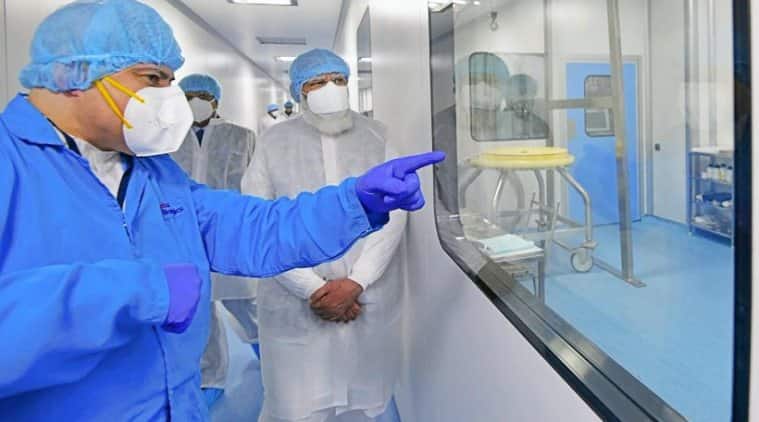 At his meeting with Chief Ministers last week, Prime Minister Narendra Modi too asked states to send detailed plans on last mile-delivery. “The experience of states (on vaccine administration) is of utmost importance. Because everything moves from the state level,” he said.

In an Idea Exchange session at The Indian Express, Nandan Nilekani, former chairman of the UIDAI and the architect of Aadhaar, had proposed a roadmap. “My suggestion is that we create a platform to do 8-10 million vaccinations a day by authorised vaccinators. We have a system to train 200,000 people on how to vaccinate, explain to people the side-effects… There is an app, and one can take an appointment for vaccination. I will give my name, do an Aadhaar authentication… The information could then be sent in real time to a cloud location, and it will send back a digital certificate to me… Because in the Covid-19 vaccine system, it is not only important that I am vaccinated, it is also important that you know that I am vaccinated. The digital certificate can then be shown at a job interview, airport, railway station, bus stand etc.”

A key part of the roadmap is taking stock of the cold storage facilities at different stages once a vaccine leaves the factory.

By the end of last week, the government had identified as many as 28,947 cold chain points. These are essentially deep freezers and ice-lined refrigerators to store the vaccines at primary and community health centres and districts at 2 to 8 degrees Celsius; as well as larger walk-in coolers and freezers at the state and regional levels.

Sources said these 29,000 points are adequate for vaccines needed to be given in the first phase to healthcare workers. Pawanexh Kohli, former CEO of the National Centre for Cold Chain Development, a think-tank on agri-logistics, said India has sufficient cold storage infrastructure, including in the private sector. “A cold chain is not defined according to sector but temperature. In India, cold chain technology as base infrastructure within the logistics network is sufficient enough. All we have to do is compartmentalise with wall panels and we can store the vaccines alongside food. India also has about 20,000 transport trucks designed to store up to -25 degrees Celsius,” he said.

Saying it’s more important to focus on management, Kohli pointed out, “We are not planning for storage; millions of vaccine doses will get over in a few weeks. We must identify the terminal inoculation centres, then work backwards and plan how that centre can be provided a particular cold store. The planning will have to factor in the distance between point A and B.”

States are submitting their plans to the Centre. For instance, Karnataka has proposed three new vaccine stores in Bengaluru, Shivamogga and Ballari districts. The state has also identified 30,000 vaccination sites, and sought additional cold storage equipment from the Centre.

And when things go wrong…

A crucial unknown is the possibility of adverse events or health complications following the vaccination.

India has an existing mechanism called the AEFI (Adverse Events Following Immunisation) Secretariat under the UIP, including doctors, data specialists and health workers. But again, Covid is a whole new territory. While the AEFI is limited to tracking adverse events among children, now adults will have to be kept an eye on, particularly given the comorbidities risk in Covid-19.

Experts also flag another issue. “Given that the vaccine will be administered on the basis of emergency use authorisation, we don’t have enough data on long-term safety and efficacy. Therefore, from a safety perspective, it will very crucial to strengthen adverse event reporting,” said Dr Anant Bhan, a researcher in bioethics and global health.

States have been directed to revamp the AEFI committees to include, apart from paediatricians, neurologists, cardiologists and respiratory medicine specialists. The Centre has also sought adequate stocks of adrenaline injections, to be administered in the event of any severe allergic reaction. Next week, it will issue guidelines to states on how to communicate to people on vaccine safety.

In his meeting with CMs, the PM had said, “For us, safety is as necessary as speed.” At an all-party meeting on December 4, he said experts believe a “cheap and safe” vaccine would be ready in the next few weeks. “It is natural the world is watching India,” he said.

As are billions of Indians.

People with weak immunity may be breeding grounds for new, mutated strains of coronavirus, say researchers

Coronavirus surge mainly down to increased mixing over Christmas – WHO

Does India want the COVID-19 vaccine? Here’s what a survey reveals