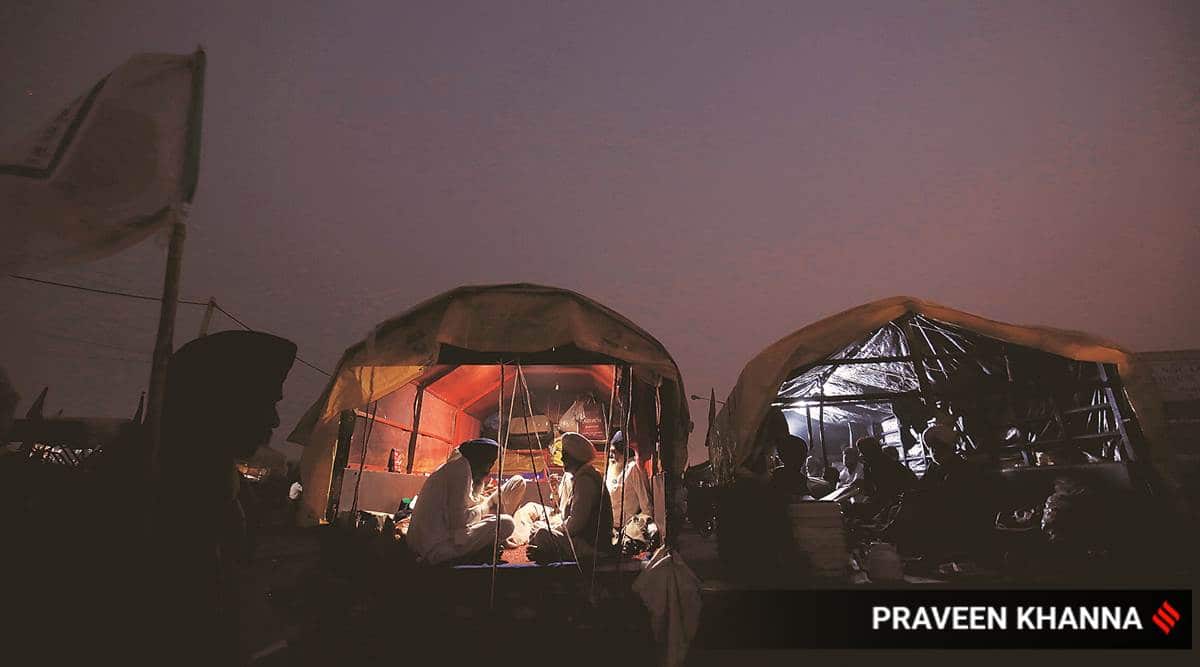 
Farmers at the Singhu border in New Delhi on Friday. (Express photo by Praveen Khanna)

Having announced its intention to address key concerns of farmers such as levelling the playing field between APMC mandis and private markets, registration of traders, and allowing farmers’ recourse to civil courts for dispute resolution, the Central government Friday internally discussed options on how to incorporate these changes.

Union Agriculture Minister Narendra Tomar met senior officials in Krishi Bhawan and went through the 10-page note mailed by farmers’ unions on Thursday morning and the substance of the talks during the seven-hour discussion later that day.

Hopeful of breaking the deadlock Saturday when the talks will resume, sources said the government was willing to even give a written assurance to farmers on the continuance of MSP (Minimum Support Price) and the manner of procurement to farmers. “A written assurance on MSP and procurement is just short of putting it down in law,” said a source, indicating the distance the government was willing to walk to placate the farmers.

The government’s conciliatory stance is also influenced by ground reports about deep resentment among farmers in Punjab. They were told that in spite of the successful procurement of paddy, farmers believed the farm laws spelt an end to the APMC regime. It was also pointed out that had the party’s former ally Akali Dal not channelled that anger, hardline forces may have hijacked the protests. The top leaders were told the resentment was more pronounced in the Malwa region of Punjab that borders both Haryana and Rajasthan.

Farmers’ protest Explained: What are the big concerns, what can the government negotiate?

Former BJP MP and Additional Solicitor General Satya Pal Jain, who has been representing the Centre in farmer-related cases in the Punjab and Haryana High Court, said all issues were on the table. “The government is also considering farmers’ apprehensions around the MSP. I am confident things will be sorted out soon,” Jain said.

In the meeting with the 40 representatives of farmers’ unions on Thursday, the government had identified four key issues related to the new farm laws. These include: a level-playing field between APMC (Agricultural Produce Market Committee) mandis and private markets; need for proper registration of traders outside APMC mandis; recourse to civil courts to dispute resolution, which right now is officer-led; and the need for registration of contract farming.

Besides these, the unions demanded that the MSP system be hardwired in the law itself.

After the meeting, Tomar had said the government would consider the points identified in the meeting. It is learnt that officials from the agriculture, food and law ministries discussed various options. While some concerns of the farmers can be addressed through executive orders, some others may require amendment to the laws.

Explained Ideas | Farmer protests: Why the govt should not allow the positions to harden

For instance, to ensure samyata (level-playing field) between the APMC mandis and private markets, amendment of Section 6 of the Farmers’ Produce Trade and Commerce (Promotion and Facilitation) Act, 2020 may be required. Similarly, a tweak in the provisions of the Act will be required to allow disputes to be taken to civil courts. Under the Act, Section 15 states that disputes arising out of transactions in the alternative markets cannot be entertained in regular civil courts. Instead, these have to be compulsorily referred to conciliation boards and appellate authorities appointed by the local Sub-Divisional Magistrates and District Collectors.

A rape allegation, a Minister and claims of blackmail: How Dhananjay Munde’s controversy is taking a twist