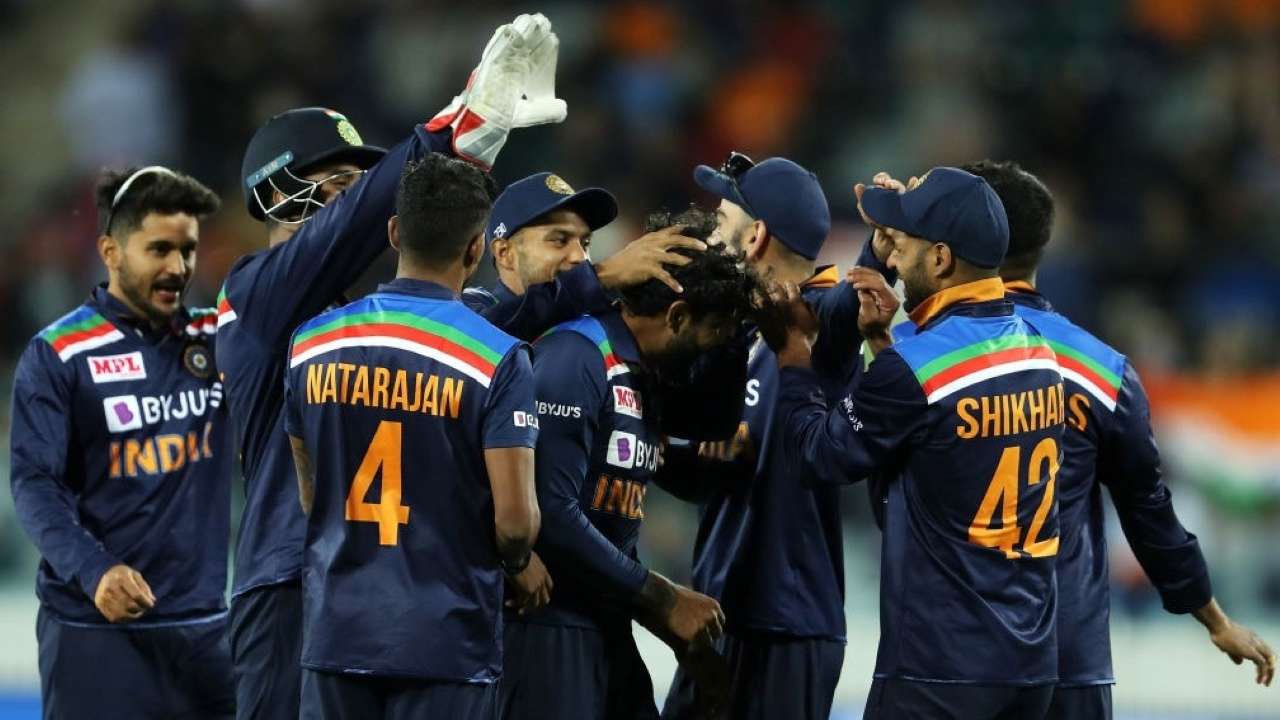 Team India finally looked in some sort of rhythm and one-day international touch as they clinched a thriller in Canberra on Wednesday, beating Australia by 13 runs in the final game.

After losing the first two games, India came back in the third, even though there were moments where it looked like Australia were taking the game away.

But, India kept coming back by taking regular wickets and didn’t let Australia off the hook, despite Glenn Maxwell’s fighting innings of 59 (38).

By the virtue of this win in a dead-rubber game, India avoided a clean sweep at the hands of Australia and will look to take this winning momentum into the T20I series, starting Friday.

Here we look at the three moments that changed the game for India:

India were struggling during the major part of their batting innings as they kept losing wickets.

Despite skipper Virat Kohli’s innings of 63 runs, India were staring down at a middlish 250-260 total.

India were 152-5 at the end of 32 overs and required something special from both Hardik Pandya and Ravindra Jadeja.

Pandya took charge; he was aggressive from the start and took the attack to the Australian bowlers. He didn’t play many dot balls, which helped him to soak the pressure and keep the scorecard ticking. Till then, Jadeja was set.

Both the batsmen targeted Sean Abbott, who was playing an ODI after six years. In the 46th over of the innings by Abbott, Pandya smashed two fours and a six and took 17 runs off that over in total.

In the next over by Josh Hazlewood, Jadeja smashed two sixes and started to feel a lot better.

The 48th over of the innings proved to be the gamechanger for India as Jadeja hit three fours and a six as India accumulated 19 runs off that over and Jadeja reached his half-century in 43 balls.

The duo ended with an unbeaten partnership of 150 runs – third highest sixth wicket partnership for India in ODIs, which was vital to them breaching the total of 300-mark.

In Australia’s fearsome and long batting line-up, Steve Smith has a tall presence and has been the one player, who has troubled the men in blue the most, including this series.

Smith was coming off two centuries in the previous two games and India knew, how big a wicket he was. Unlike the first two games at SCG, the pich at the Manuka Oval was assisting the bowlers, as pacers were getting bounce and movement, while spinners were getting the ball to grip.

Shardul Thkaur, one of the four changes that India made, got Smith to err as the latter tried to flick a delivery outside the leg-stump. Unfortunately, for him, he just got a thick edge into the hands of the keeper and couldn’t get it from the middle of his bat. It was a huge wicket for India, who have been finding ways to get him out.

Final nail in the coffin – wicket of Glenn Maxwell

Australia couldn’t build longer partnerships as India kept coming back with wickets, however, Maxwell looked dangerous and was taking the game away from them. Maxwell and Ashton Agar had constructed a well-compiled 58-run partnership and was threatening to win it for the Aussies.

Australia required 35 runs off 34 balls and India desperately needed wickets. And, as always Jasprit Bumrah came into the attack and provided the much-needed breakthrough.

Maxwell made room to hit the ball through the off-side, but Bumrah kept it full and straight and broke his stumps. After which, it started a procession as India got Australia all out on 289 and won the game by 13 runs.

India will now face Australia in the three-match T20I series, starting on Friday, December 4, at the same venue of the third ODI, i.e., Manuka Oval in Canberra.

IPL 2021: Which players will be released, retained by Kings XI Punjab?

BREAKING: Jasprit Bumrah ruled out of Brisbane Test due to abdominal strain