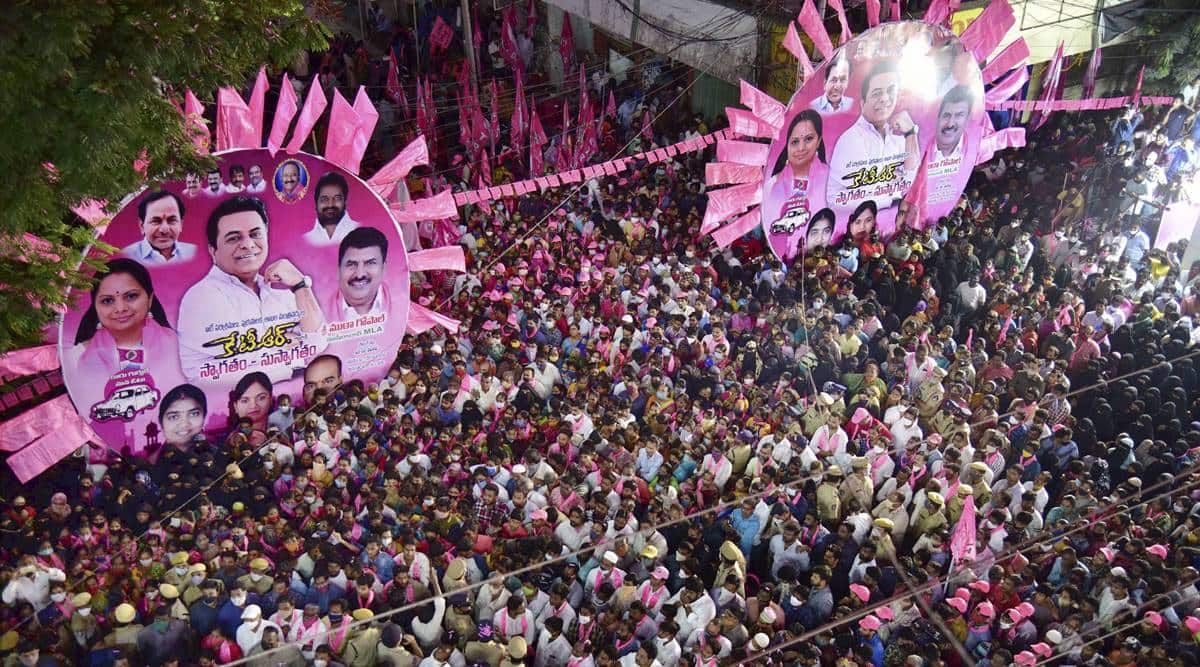 Even as the TRS retained its position as the single-largest party in the Greater Hyderabad Municipal Corporation (GHMC) elections, the KCR-led party may need the support of others to retain the mayor’s post.

In the results declared Friday, the ruling TRS witnessed a downfall in its performance, with BJP dislodging the party from half the seats it had held since 2016. While the BJP tally went up from four in 2016 to 48, the TRS numbers went down from 99 to 55.

With only one result in the 150-member GHMC still pending following the order for a recount, the TRS will finish well short of the mark of at least 65 seats to get the mayor’s post.

Explained | What is at stake for the TRS and BJP?

The party may need to rely on outside support, apart from its strength of ex-officio members, who can participate in voting. The Lok Sabha MPs and MLAs who have their vote in the city are ex-officio members of the GHMC. Besides this, the MLCs and Rajya Sabha members, who have their vote in the city, have to give an option choosing the GHMC to be able to vote in the mayoral poll, PTI reported quoting sources.

The TRS can also move forward with the support of the AIMIM, but the party is mindful of such an alliance. During the campaigning for the polls, K T Rama Rao, Municipal Administration Minister and son of Chief Minister K Chandrasekhar Rao, had refuted allegations of a “secret alliance” between the TRS and AIMIM by Home Minister Amit Shah. Rao had then said there is no “question of a tie-up” as the party was contesting all 150 wards in the polls.

While the TRS is now reviewing its performance in the polls, the BJP is celebrating the “saffron surge” in the southern state. BJP leaders said the party’s performance “made it ambiguously clear that it is emerging as the alternative force” in Telangana, which they said was their agenda for this election. The party sees Telangana as one of the states where it has the most chance after Karnataka.

Thank you Hyderabad for the saffron surge in GHMC polls! pic.twitter.com/wMpbkidqT9

BJP Telangana chief Bandi Sanjay Kumar said, “The BJP’s win in the November 10 Dubbaka by-election was the defeat of T Harish Rao, the nephew of Chief Minister K Chandrashekar Rao. The GHMC polls have dealt a bigger defeat to K T Rama Rao, the son of the CM (he led the TRS campaign).”

The results have also been bittersweet for the AIMIM. While the party retained its tally of 44 seats, while contesting 51 seats instead of 60 last time, it won fewer seats than the BJP. The GHMC polls were a prestige battle for AIMIM president Asaduddin Owaisi on his home turf, and the BJP that ran a high-pitch campaign rolling out its big guns had principally targeted it. Among the 48 seats won by the BJP, six were in the Muslim-dominated Charminar division.

The newly-elected GHMC ward members would have to wait till February to take oath as the term of present body ends on February 10.

For all the latest Hyderabad News, download Indian Express App.