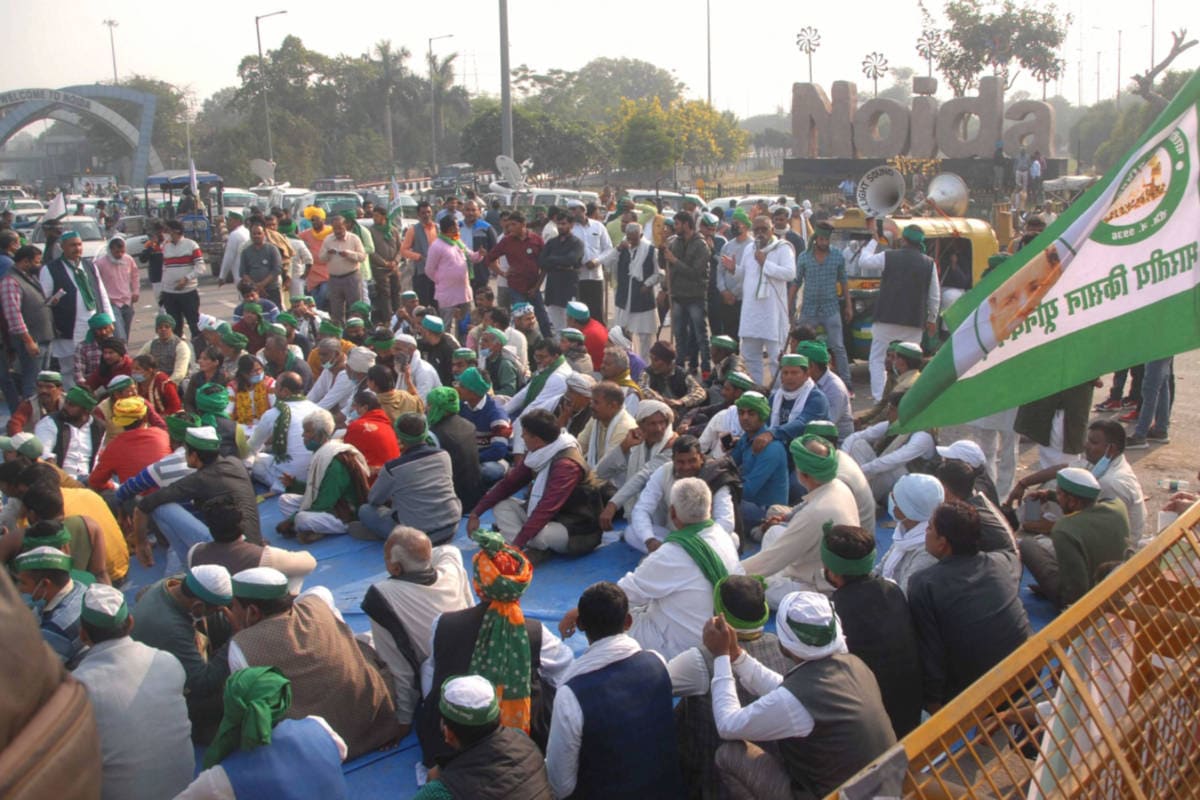 Ahead of Thursday talks, Union Home Minister Amit Shah held deliberations with agriculture minister Narendra Singh Tomar and Railway Minister Piyush Goyal in New Delhi on Wednesday on ways to dispel concerns over the new farm laws. Tomar, Goyal along with Minister of State for Commerce Som Parkash had represented the Union government on Tuesday during the talks with farmer leaders but failed to reach any breakthrough.

As part of their ‘Delhi Chalo’ march, farmers have currently been staging protests at four busy border points of the national capital – Singhu, Noida, Ghazipur and Tikri – to press their demands under heavy police deployment. Leaders of around 35 farmer organisations held a meeting which was also attended by Bhartiya Kisan Union leader Rakesh Tikait at the Singhu border.

“The Centre should call a special session of Parliament to repeal the new farm laws. We will continue our agitation till these laws are repealed,” Krantikari Kisan Union president Darshan Pal told reporters after the meeting. He accused the Centre of dividing the farmers organisations by projecting the ongoing protests as Punjab-centric.

Another farmer leader Gurnam Singh Chadoni said that if the Centre does not withdraw the laws, more steps will be taken in the coming days to press their demands. According to Tikait, all the farmers’ unions want that MSP should be turned into a law and the three central farm laws repealed. “The government had asked us to give in writing what were the problems with the laws. There would have been room for a written statement had we been looking for an amendment in the laws, but we just have one demand – completely doing away with the laws,” he told PTI.

He also said that the farmers have rejected the idea of a committee. “There are simply too many committees in the country. There have been several committee reports in the past but they don’t result in anything. Committees are created essentially to avoid an uprising. I have been part of the farmers’ movement for nearly 30 years, so I know that much,” Tikait said. “If the government does not come to a decision in the next few days, we will increase pressure on NH8 and NH2, we have been in talks with our farmer brothers in Rajasthan,” he threatened. The day also saw Punjab Chief Minister Amarinder Singh and his Delhi counterpart Arvind Kejriwal trading charges against each other over the AAP government’s notification of one of the three central farm laws.

Kejriwal accused Singh of playing “dirty politics” and suggested that he was under pressure from central agencies. But Singh trashed Kejriwal’s assertion that states are “helpless” against central legislation and said it was clear that the AAP leader did not even want to try to fight the “draconian” laws. “Instead of meekly just notifying the central laws, Kejriwal could have tried to make some effort to counter them and protect the rights of the farmers,” the Punjab chief minister said.

He alleged it is evident that “this sneaky little fellow, whose double standards have been exposed time and again, is now completely cornered on the issue”. The protest at the Delhi-Noida route (Chilla Boarder) intensified leading to the closure of the key route for the second consecutive day as more farmers from Firozabad, Meerut, Noida and Etawah started gathering there. Later, one carriage was opened for motorists.

More farmers from Firozabad, Meerut, Noida and Etawah started gathering, Bhim Army chief Chandrashekhar Azad is likely to join farmers on Thursday at the Singh Border where thousands have been protesting for the last seven days. Azad had joined protest being held at the Ghazipur Border near UP Gate. Meanwhile, Kejriwal claimed that the Centre was angry with him for not permitting stadiums to be used as temporary jails for farmers protesting against the farm laws.

On Wednesday, around 2,00 farmers who have been camping near Ghazipur Border since Saturday refused to leave the site unless their demands are met. The farmers who are mainly from Uttar Pradesh have also been joined by groups from Uttarakhand.

A senior police officer said “The farmers at Ghazipur Border wants to either move to Ram Leela Maidan or to Jantar Mantar. Everyday, they try to push our barricades with their vehicles in an attempt to enter Delhi but in any case, we will not allow them to enter. However, the situation on ground now remains peaceful.” A protestor camping at the Ghazipur border said farmers are here despite facing huge losses back home. “This is the time we harvest sugarcane. But this is more important. We will continue to protest until the government agrees to our demands,” Sonu, a member of Muzaffarnagar Bharatiya Kisan Union, said.

More farmers also started gathering at Singhu border, one of the major protest sites. According to police, checking of vehicles has also been intensified at the border points as a precautionary measure in view of the ‘Delhi Chalo’ protest march by farmers.

“Cemented barriers and multi-layered barricades have been put up besides heavy security personnel at Ghazipur border near UP gate where many farmers have been protesting since Saturday,” a senior police officer said. Away from the comfort of their homes and undeterred by the winter chill, farmers camping at Delhi’s Singhu border against the Centre’s agriculture reform laws say they are prepared for a long haul and will not leave until their demands are met.

The farmers, who have come from the neighbouring states of Punjab and Haryana, start their day with a bath at petrol pumps, where they also wash their clothes. They return the favour by cleaning the petrol pumps. Then they cook on the roadside. Anyone visiting the protest site is also offered a wholesome meal which includes dal, rice, paranthas and kheer on different days. Farm leaders met Union ministers on Tuesday, but the two sides failed to break the deadlock.