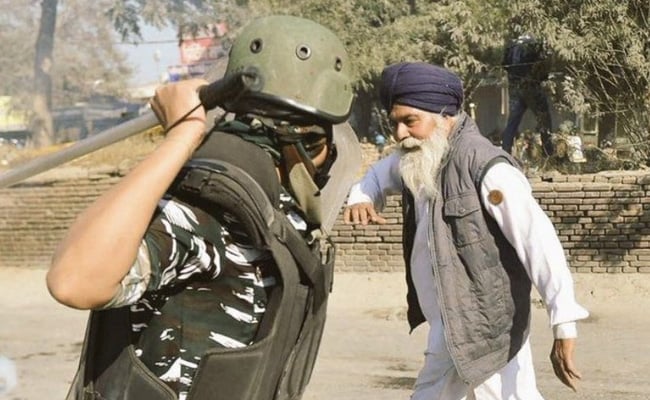 The image of an elderly man running as a policeman came at him with a stick during farmer protests went viral after it was tweeted by several Congress leaders and the BJP questioned whether he was really beaten.

NDTV tracked down the farmer in the image, Sukhdev Singh, who said he did suffer multiple blows from lathis and has bruises all over his body. The 60-year-old was among the farmers at the Singhu border between Delhi and Haryana, who faced a heavy police crackdown on Friday while trying to enter the capital.

“They hit us with water cannons, tear gas and then used sticks,” Sukhdev Singh said, showing a dark weal on his arm.

Mr Singh, still at the spot with hundreds of farmers on the highway, said he couldn’t understand why he was beaten when he was not chanting any slogans or throwing stones. He came from Punjab’s Kapurthala and has resolved to stay until the farm laws that triggered the protests are taken back by the central government.

The image that was tweeted by several Congress leaders, including Rahul Gandhi, showed Sukhdev Singh dodging a blow from a CRPF (Central Reserve Police Force) personnel.

Amit Malviya tweeted that the photo was only half true, that the farmer was never hit. He wrote “propaganda vs reality” as he posted a video showing the cop raising the baton but the farmer escaping the blow.

Rahul Gandhi must be the most discredited opposition leader India has seen in a long long time. https://t.co/9wQeNE5xAPpic.twitter.com/b4HjXTHPSx

Fact-check website Alt News then posted a longer video, which showed policemen raining blows on protesters. It was not clear, however, whether Mr Singh was hit.

BJP IT cell head Amit Malviya attempted to water down police action on protesting farmers using a clipped video. While he claimed that an elderly farmer wasn’t beaten up, there are videos of him showing his injuries. pic.twitter.com/Cz4ZQsaVgI

Images instagrammed by PTI photographer Ravi Choudhary, who took the original photo tweeted by Rahul Gandhi, showed Mr Singh being hit on the shin, though possibly by a different cop. 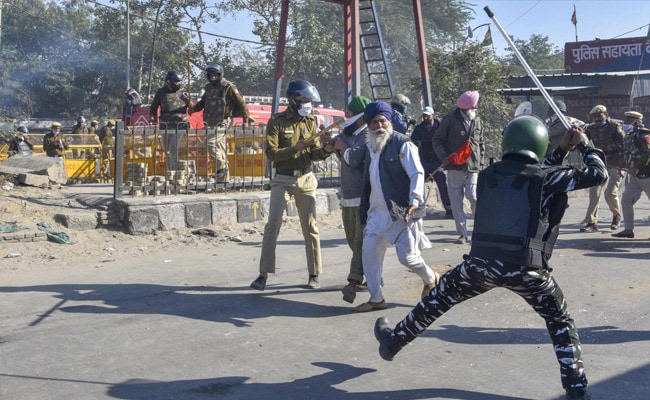 Sukhdev Singh, 60, was among the farmers at the Singhu border between Delhi and Haryana, who faced a heavy police crackdown on Friday while trying to enter Delhi (PTI)

Ravi Choudhary was quoted by Alt News as saying: “I clicked the picture from the other side and it cannot be said with certainty whether the baton touched the farmer or not because there was a lot of commotion at the time. The police were lathi-charging at the protestors and the farmer was running in the other direction to save himself. He may have been hit by another cop earlier if not this one.”

Negative RT-PCR certificate not compulsory for all passengers to Bengaluru