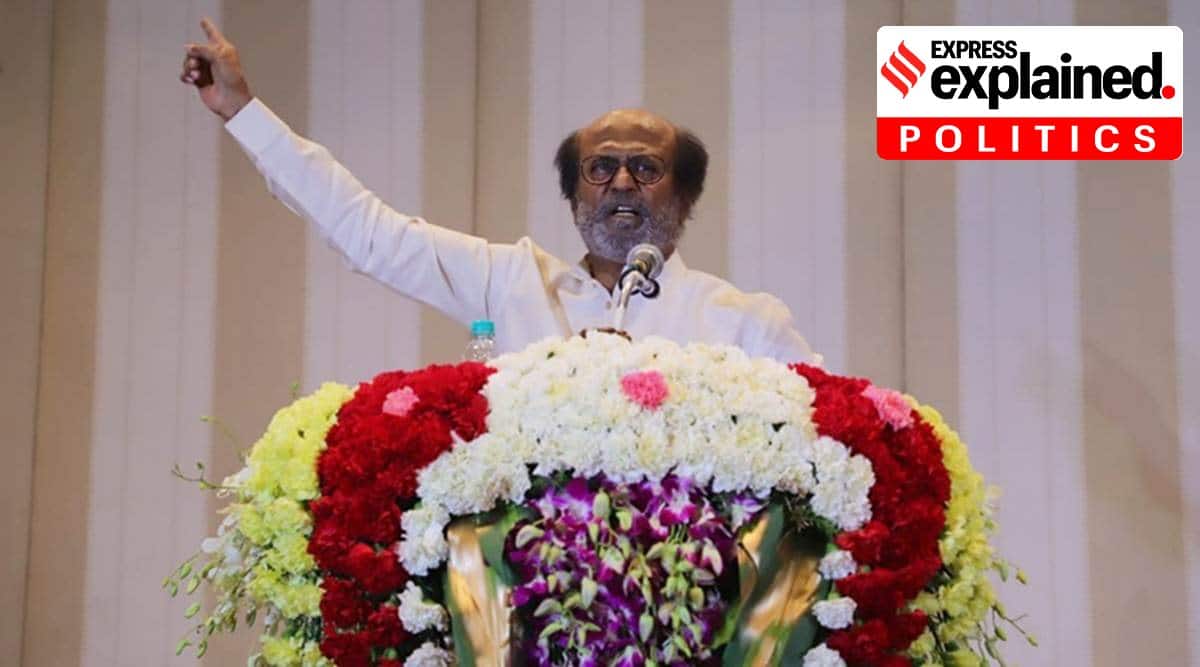 
On Thursday, Rajinikanth announced that he will launch the party in January 2021, and that the date for the same will be announced on December 31.

Tamil actor Rajinikanth announced that he will launch his political party in January 2021, ahead of the 2021 Assembly polls. Even as the announcement on Thursday was expected this month, there were speculations that he could cancel his plan owing to the pandemic.

Talks about his political entry started in 1996, when he first spoke against the then Chief Minister J Jayalalithaa, and even claimed later that it was his statement that defeated her in the polls.

The first decisive statement about his political outfit, however, came more than two decades later, in December 2017. And in March 2020, he said he will enter politics but that he will not contest.

Now that Rajinikanth has finally made it clear and it is very unlikely that the unassuming actor would change his mind before December 31, here are the major highlights of his political entry.

Rajinikanth’s statements so far about his political entry

On Thursday, the actor announced that he will launch the party in January 2021, and that the date for the same will be announced on December 31. He said he will form a party which is “honest, non-corrupt, transparent and secular,” following a “spiritual politics,” to win the polls. The unpopular word “spiritual” in Tamil Nadu’s dominant Dravidian politics was clarified by the actor in a statement earlier: “Honest and corruption-free.”

After tweeting his decision, he met mediapersons at his residence and asserted that there will be a regime change.He also added: “Everything has a fate. This election is to change the fate of Tamil Nadu.”

“If I win, that will be victory for people, and if I fail, that also belongs to them,” he said.

Likely scenario of May 2021 polls with Rajinikanth’s entry

There were three fronts in May 2016 polls – AIADMK, DMK and a third front consisting Left, Dalit parties. The impact of the third front favoured AIADMK to retain power for the second time as it had helped to split opposition votes and the strong anti-incumbency wave.

With Rajinikanth’s political entry, yet again there is a third front now. And many observe that unlike in 2016, Rajinikanth may be getting more votes from the bastions of AIADMK and BJP, not DMK or Left-leaning, minority sections.

Possible alliance equations remain unclear. In 2017, Rajinikanth had said he will go it alone.

If Rajinikanth’s party is going to contest alone, it is most likely to repeat the political entry of Captain Vijayakanth in 2006 polls, in which he got a little more than 8 per cent vote share even as not a single candidate from his new outfit, except Vijayakanth himself, won the election. 📣 Follow Express Explained on Telegram

Unless serious disputes emerge over seat-sharing talks, parties such as CPM, CPI, VCK and Vaiko’s MDMK are unlikely to leave the present DMK alliance. When Rajinikanth categorically speaks about a regime change, his stand against the ruling AIADMK is clear. And many observe that Rajinikanth is unlikely to join hands with an unpopular BJP too before polls. But PMK, another ally of AIADMK and NDA, may join hands with Rajinikanth’s outfit as there had been talks in this regard last year. PMK is a party founded by S Ramadoss, notorious for several anti-Dalit riots in the past and flaunts the vote base of Northern Tamil Nadu’s OBC-Vanniyar community.

And other prominent groups remain scattered outside the two Dravidian alliances are Kamal Haasan’s MNM and TTV Dhinakaran’s AMMK. It remains unclear if Rajinikanth would love to strike an alliance with Kamal Haasan. But it is most unlikely that he would go with Dhinakaran’s AMMK which carries the baggage of the unpopular family of V K Sasikala, Dhinakaran’s aunt.

His fans, most of them in their 50s and 60s, had been waiting since 1996 for his political entry, and they had to wait three more years even after his first announcement in December 2017. What gives them a fresh spirit now would be nothing less than a hope to make Rajinikanth the Chief Minister of Tamil Nadu.

If it was the lack of prominent, familiar faces that killed the sheen of Haasan’s political entry in early 2018, Rajinikanth is definitely a much more popular figure in Tamil Nadu.

Still, Rajinikanth has no prominent face in his camp now except few politicians, who are known for their active role in Rajinikanth’s fans association, including AIADMK’s Saidai Duraisamy, the former mayor of Chennai City Corporation, and Karate Thiagarajan of Congress party.

Irrespective of prominent faces he would get in his fold in coming days, it is also going to be crucial about Rajinikanth’s candidature.

If he is not contesting or not being projected as the chief ministerial candidate, why would his fans, who had been voting for different political parties in all these years, support a new political outfit with unheard faces?