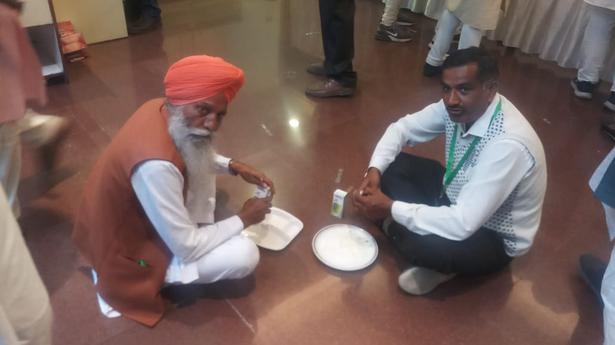 Next round of talks on December 5; farmers decline government lunch, tea during talks.

Farmer leaders refused to accept the government’s offer for lunch and tea during the discussions with Central Ministers at Vigyan Bhavan on December 3, preferring to bring in their own food from a nearby gurdwara.

“The government said they would not repeal the three laws, and there is much anger about that, and a lot of heated arguments going on in the meeting room. In that situation, how can they eat the government’s food during the lunch break,” asked one farmer leader at the Singhu border, whose colleagues were inside Vigyan Bhavan. “So they brought lunch for themselves from a gurdwara langar instead, just regular chapati and dal. A few minutes ago, during the tea break, chai was also taken in from outside,” he added.

Previous comments on social media had also left a bad taste in the farmers’ mouths. “Last time, there were photos of the farmers eating the Vigyan Bhavan buffet which were put out by a government handle on social media. There were some unnecessary comments that the farmers were enjoying a sumptuous meal at government expense, so we thought it was better to avoid that,” said one member of the delegation.

A letter from the Editor

Your support for our journalism is invaluable. It’s a support for truth and fairness in journalism. It has helped us keep apace with events and happenings.

The Hindu has always stood for journalism that is in the public interest. At this difficult time, it becomes even more important that we have access to information that has a bearing on our health and well-being, our lives, and livelihoods. As a subscriber, you are not only a beneficiary of our work but also its enabler.

We also reiterate here the promise that our team of reporters, copy editors, fact-checkers, designers, and photographers will deliver quality journalism that stays away from vested interest and political propaganda.