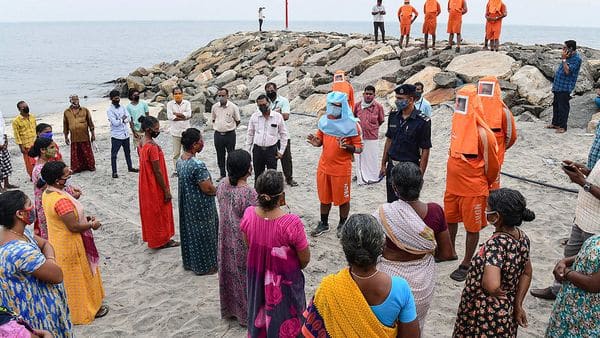 Both Tamil Nadu and Kerala have taken all precautionary measures to meet any emergency situation in the wake of the Cyclone Burevi, which is expected to hit the states on 4 December.

Prime Minister Narendra Modi also spoke with the Chief Ministers of Tamil Nadu and Kerala and discussed about the prevailing situation in parts of the states while pledging all possible support from the Central Government.

Tweeting about his telephonic conversation with Tamil Nadu Chief Minister K Palaniswami, PM Modi wrote, “We discussed the conditions prevailing in parts of the state due to Cyclone Burevi. The Centre will provide all possible support to Tamil Nadu. I pray for the well-being and safety of those living in the areas affected.”

On his telephonic conversation with Kerala Chief Minister Pinarayi Vijayan, PM Modi said, “Assured all possible support from the Centre to help Kerala. Praying for the safety and well-being of those staying in the affected areas.”

Here are the latest updates on Cyclone Burevi:

1) Thiruvananthapuram, Tuticorin airport to remain closed – Thiruvananthapuram International Airport will remain closed from 10 am to 6 pm on Friday, as a measure to ensure the safety of airport operations in view of the Cyclone Burevi. Also, Tamil Nadu’s Tuticorin Airport will remain shut for operations till 12 pm tomorrow as a precautionary measure in the wake of Cyclone Burevi.

2) TN declares holiday in 6 districts tomorrow – Owing to the landfall of Cyclone Burevi, the Tamil Nadu government has declared holiday in six districts on Friday. These districts are — Virudhanagar, Ramanathapuram, Thirunelveli, Thuthukudi,Thenkasi and Kanyakumari. However, essential services will continue in these districts.

3) Armed forces at Trivandrum gear up – As Cyclone Burevi is expected to make landfall by tomorrow morning, the Armed Forces stationed at Kerala’s capital geared up and activated their assets to face the potential hazard. Senior Officers from armed forces met the officials of the state government and analysed the situation, according to an official press release from the Kerala government. Also, 26 teams of the National Disaster Response Force have been deployed across Tamil Nadu and Kerala in the wake of Cyclone Burevi.

4) Puducherry schools to remain shut – As per latest developments, all government and private schools in Puducherry will stay closed on Friday due to continuous rainfall triggered by Burevi cyclone.

5) Storm surge of about 1-m height – As Burevi inches closer to the southern shores, the cyclonic storm is likely to generate storm surge of about 1-m height above astronomical tide. The storm surge is very likely to flood low-lying areas of south coastal Tamil Nadu (Ramanathapuram, Thoothukudi, Tirunelveli and Kanniyakumari) during the time of landfall, the Ministry of Earth Science said today.

6) Kerala sounds alert in health sector – The state health department on Wednesday sounded an alert in the wake of the cyclone Burevi. Health Minister K K Shylaja said the alert was issued to effectively combat various health issues caused by the cyclone and rains and the subsequent epidemic.

9) CM Vijayan calls for high-level meeting – As Kerala remains under high alert expecting heavy rainfall and winds, Chief Minister Pinarayi Vijayan has called for a high-level meeting of the State Disaster Management Authority and other departments.

‘Chakka Jam’: All you need to know about road blockade by farmers on Feb 6