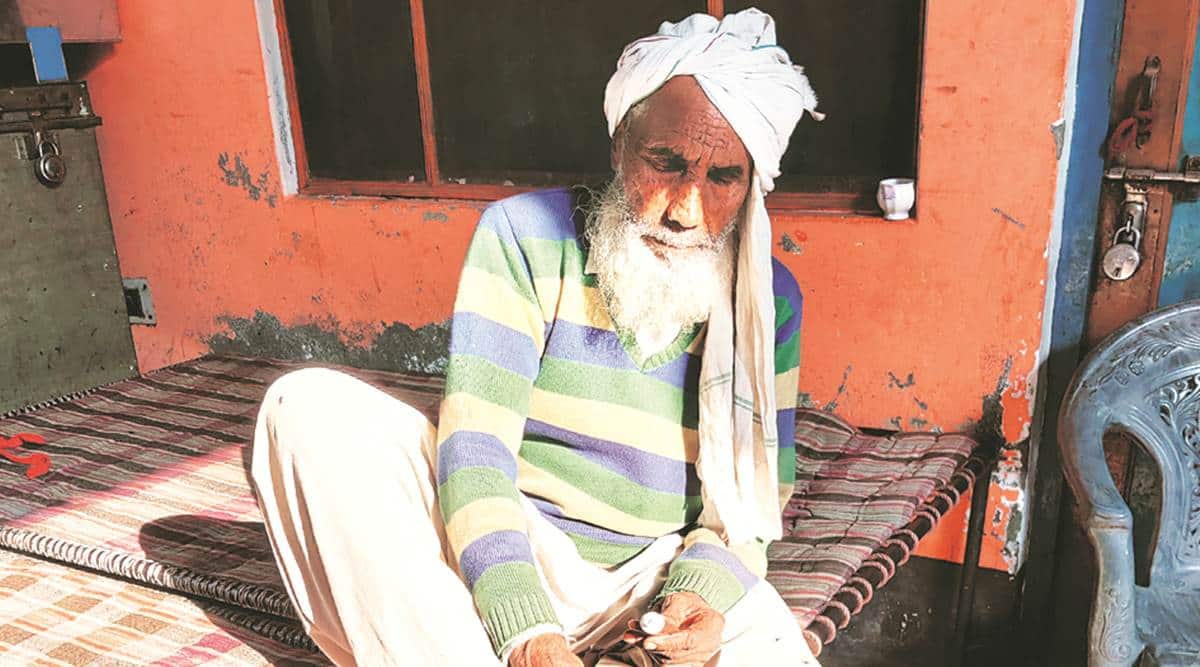 THE FAMILY members of the 21-year-old Muslim youth who became the first arrest under Uttar Pradesh’s new anti-conversion law have claimed that the woman’s relatives filed the case under pressure from the police. The case was filed within 12 hours of the UP Prohibition of Unlawful Conversion of Religion Ordinance, 2020, coming into force on November 28.

Several residents of the Bareilly village, including the pradhan, Dhruv Raj, also expressed surprise at the case, saying the matter had been “settled” between the two families, with the woman, a Hindu, getting married to another man in April.

Owais Ahmad’s 70-year-old father Mohammad Rafeeq told The Indian Express that the police had beaten him up as they looked for Ahmad, the youngest of his 10 children. Ahmad was arrested on Wednesday.

Rafeeq said the love jihad allegations were not just hurtful but “scary”. “The family members of the woman are nice people and we do not have any dispute with them. I know they did not get the FIR registered against my son… The woman’s father met me and said he would support me in the case. The police got the FIR registered just to gain praise and promotions. They beat me up and might be threatening the woman’s family too,” Rafeeq said, showing “injuries” on his foot. 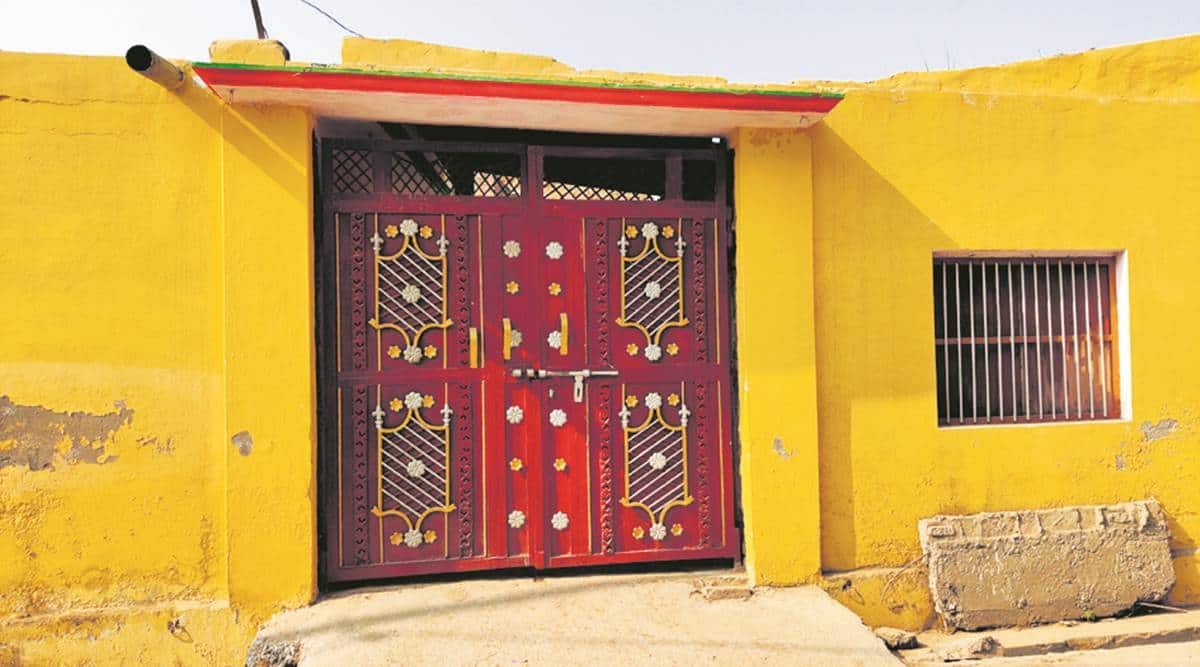 The woman’s house in Bareilly. (Express photo by Avaneesh Mishra)

The woman’s family, that lives less than 100 metres from Ahmad’s house, has locked itself up inside its home, and blocked all attempts to contact them.

Denying that the police had put pressure to have the case filed, so as to be the first in the state to act under the law pushed by the Yogi Adityanath government, Bareilly (Range) DIG Rajesh Pandey said the charges appear to have merit. He added that the timing was a “coincidence”. “If we had got the complaint earlier, we would have registered the FIR earlier… There might be some possibility that the complaint might have arrived on November 27, and by the time the case was registered, the law was passed.”

The police said the couple, who had eloped in October last year, had persisted with their relationship, and her family filed the case after Ahmad kept pestering her and putting pressure on them.

Incidentally, the police admit that when traced and brought back to the village last year, the woman had denied the charges of kidnapping against Ahmad by her family, and insisted she wanted to marry him. The woman was 17 years old at the time. After the matter was resolved, the final report filed in the case said the allegations against Ahmad were not found to be true.

Among those who suspect police pressure behind the new case are village pradhan Dhruv Raj, who helped the two families settle the matter last year, Naval Kishore Sharma, the father of BJP Bareilly district president Pawan Sharma and a prominent figure in the village, and Narayan Das. Several others didn’t want to come on record.

Refusing to speak much on the topic, Raj said the possibility of police pressure could not be denied as the matter of elopement had been resolved and the two families had no dispute any more.

Around 10 per cent of the families in the OBC-dominated village are Muslim. Yogendra Kashyap, a teacher at a private school, said they had always lived in harmony.

The relationship between the woman and Ahmad is said to have started while both were in school together. Ahmad studied up to Class 12 level and now does odd jobs in Bareilly.

In the FIR filed at the Deorania Police Station on November 28, the woman’s father alleged that Ahmad had been trying to “convert” her by “luring” her and “putting pressure”, and threatening them. He was booked under IPC Sections 504 (intentional insult with intent to provoke breach of peace) and 506 (criminal intimidation) apart from under the new ordinance.

“Galat hua (This should not have happened)… It is all the police’s doing,” said Narayan Das, adding that the case would not just destroy Ahmad’s life but also the woman’s once her in-laws stepped in. “The woman’s father told me the police had forced him to get the FIR registered. He told me the police forced him to sign some papers and told him what story to tell. Now the police have put pressure on them to not talk to the media… Why would the father of a woman who is now married want to raise such an issue?” Das said.

DIG Pandey, however, insisted, “prima facie the allegations appear to be true”. Admitting that the matter had been “resolved” last year, he said they had come to know she was still in touch with Ahmad and met him during her trips to the village. Talking about the elopement, Pandey said they had set up several police teams to trace the two, and eventually found Ahmad in Bihar and the woman in Madhya Pradesh, with the two having gone different ways from the village to avoid suspicion. They planned to meet in Kolkata eventually, the DIG said.

“In her statement she kept saying she wanted to marry the accused. Ahmad’s family members said they would accept her if she converted to Islam. She agreed, but her family did not. The matter went to the panchayat and it was decided that there would be neither conversion nor marriage.”

Pandey added, “As per the family’s allegations, Ahmad kept meeting her and putting pressure to convert. We have been informed that her in-laws had also come to know, and just a day before the FIR was registered, had called up her father saying they could not keep her with them.”

On claims that the woman’s father was taken away and Rafeeq beaten up, Deorania SHO Daya Shankar said the former had come to the police station only to get the case registered, and that Rafeeq had just been questioned regarding the whereabouts of Ahmad.

Since Ahmad was booked, two in Muzaffarnagar district, Nadeem and Suleman, have been charged under the new law. They are said to be absconding. On Thursday, a third FIR was registered, in Mau, against Shabab Ahmad (30) and his associates for allegedly abducting a woman just a few days before her marriage, and pressuring her to convert. Shabab is yet to be arrested.

The UP ordinance provides for a jail term up to 10 years, with all alleged offences cognizable and non-bailable. It says no person shall attempt to convert another by misrepresentation, force, allurement, any fraudulent means or by marriage. If a person converts back to the religion they most recently belonged to, that is not to be considered as conversion. Any aggrieved person can lodge a complaint, and the burden of proof lies on the accused or the person who has converted.

Ahead of Bharat bandh today, war of words between BJP, Congress