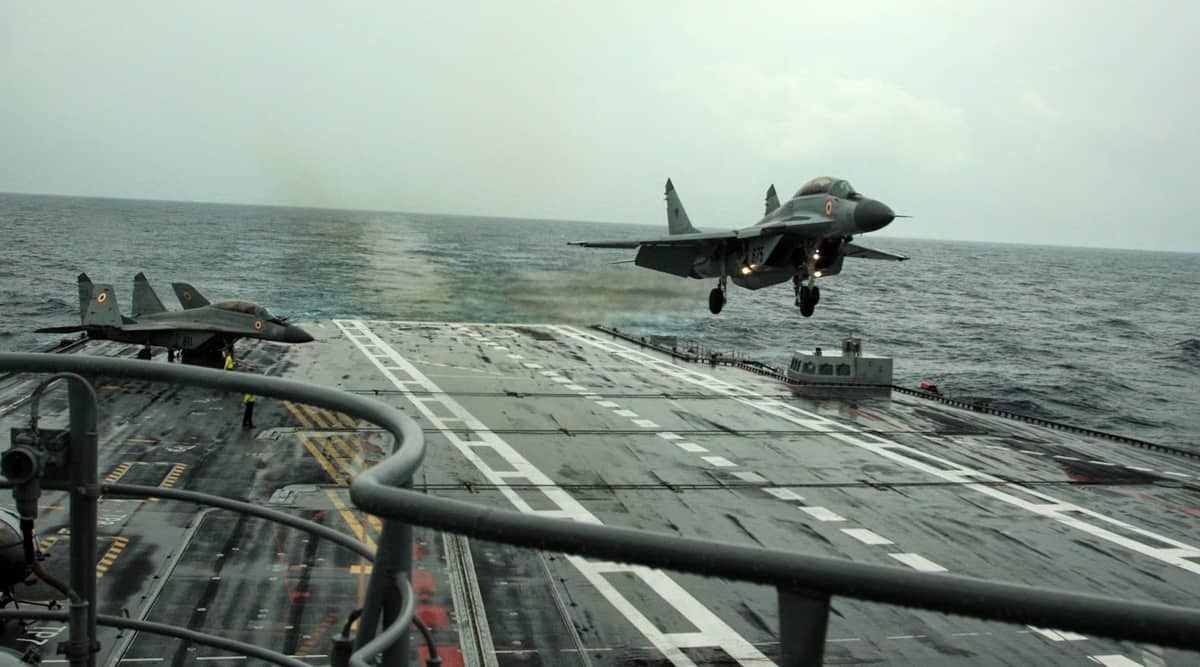 Eleven days after an MiG-29K trainer aircraft crashed into the Arabian Sea off the Goa coast, the Navy on Monday recovered the remains of a human body close to the wreckage site, believed to be that of missing pilot Commander Nishant Singh. The Russian-origin jet had taken off from aircraft carrier INS Vikramaditya on November 27, and went down at around 5 pm. While one pilot was rescued, Nishant Singh had gone missing after ejecting from the plane.

The Navy said in a statement that the “mortal remains of a human body have been recovered in the vicinity of the wreckage site” and “the samples are being sent for DNA testing for confirmation of identity”.

“All sections of the aircraft wreckage including ejection seats have been accounted for using side scan sonar and HD cameras. The FDR/CVR along with other important material have been recovered so far for analysis/investigation,” the statement said. “Aerial search by MR aircraft and helicopter sorties amounting to 270 hours have been undertaken so far,” the Navy said.

On November 29, the Indian Navy had recovered some debris of the MiG-29K aircraft. “Some debris of the aircraft, including landing gear, turbo charger, fuel tank engine and wing engine cowling have been located,” it said. The Marine Police and Coastal Police were also on the lookout and nearby fishing villages were alerted.

The INS Vikramaditya was part of the recent Malabar exercise involving the navies of India, the US, Australia and Japan. The MIG-29K fleet on board the aircraft carrier was also involved in the mega naval drill that took place from November 17 to 20.

The MiG-29K is an all-weather carrier-based multirole fighter aircraft developed by Russian aerospace company Mikoyan (MiG). The Indian Navy had procured a fleet of 45 MiG-29Ks from Russia over a decade back at a cost of around $2 billion to operate from INS Vikramaditya.

This is the third mishap involving a MiG-29K aircraft. One had developed a “technical snag” during a routine sortie in February this. In November 2019, another trainer aircraft crashed soon after take off due a bird hit and its right engine caught fire. In both the cases, the pilots were safe and investigations initiated.

In May this year, Singh’s letter to his senior had gone viral on social media. The letter — titled ‘Permission to bite the bullet’ — was filled with military jargon in what was actually a marriage invite. The Navy pilot had then sought his senior’s approval to “willingly sacrifice myself in absolute peacetime, completely outside of the line of duty and follow brave men into the graveyard spiral of matrimony”.

“I regret to be dropping this bomb on you at such a short notice, but as you would agree, I intend to a drop a nuclear one on myself and I realise that just like all the split second decisions we take up in the air in the heat of combat, I cannot afford to allow myself the luxury of time to re-evaluate my decision,” Singh said, disclosing that he was going to marry.

And in his handwritten reply in red ink, the commanding officer had warned him “Welcome to hell!”

(With inputs from Krishn Kaushik and Smita Nair)