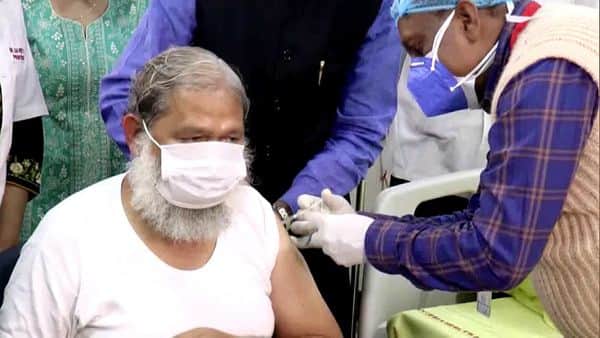 Day after testing positive for Covid-19, Haryana Health Minister Anil Vij on Sunday said that he had received only the first shot of the two-dose Covaxin, India’s indigenous coronavirus vaccine by Bharat Biotech.

The Haryana Health Minister has said that before being given the first shot in the Phase 3 trial of Bharat Biotech’s Covid-19 vaccine, he was informed by the doctors that antibodies in the human body develop 14 days after getting the second dose.

In a tweet, 67-year-old Vij clarified saying that he was told that the effectiveness of Covaxin would be determined only after a specific number of days pass after the second shot of the Covid-19 vaccine is taken.

Anil Vij has said that he is admitted to a civil hospital and is feeling fine.

The senior BJP leader has tested positive for coronavirus fortnight after getting the first trial shot of Bharat Biotech’s coronavirus vaccine candidate, Covaxin.

On 20 November, Vij was administered a dose of the potential Covid-19 vaccine at the Civil Hospital in Ambala Cantonment, as part of its Phase 3 trial.

In a tweet, Anil Vij wrote, I have been tested Corona positive. I am admitted in Civil Hospital Ambala Cantt. All those who have come in close contact to me are advised to get themselves tested for corona.

Hours after the minister announced that he has tested positive for coronavirus, the Union Health Ministry said that Covaxin is a two-dose anti-coronavirus vaccine and Haryana Health minister Anil Vij, who had volunteered for its phase-three trial, was given only the first dose.

The BJP leader had offered to be the first volunteer in the Phase 3 trials for Covaxin, which is being developed by Bharat Biotech in collaboration with the Indian Council of Medical Research.

Many questions and concerns were raised over the efficacy of Covaxin after Anil Vij tested positive for coronavirus.

Hyderabad-based Bharat Biotech also took to Twitter to allay any concerns over the efficacy of the Covaxin, saying “COVAXIN trials are based on a 2-dose schedule, given 28 days apart. The vaccine efficacy will be determined 2 weeks after the 2nd dose.”

Assembly Election 2021 News LIVE Updates: Brace Yourselves to See the Power of People on May 2, TMC Warns BJP Amid War of Words Over Mamata Attack